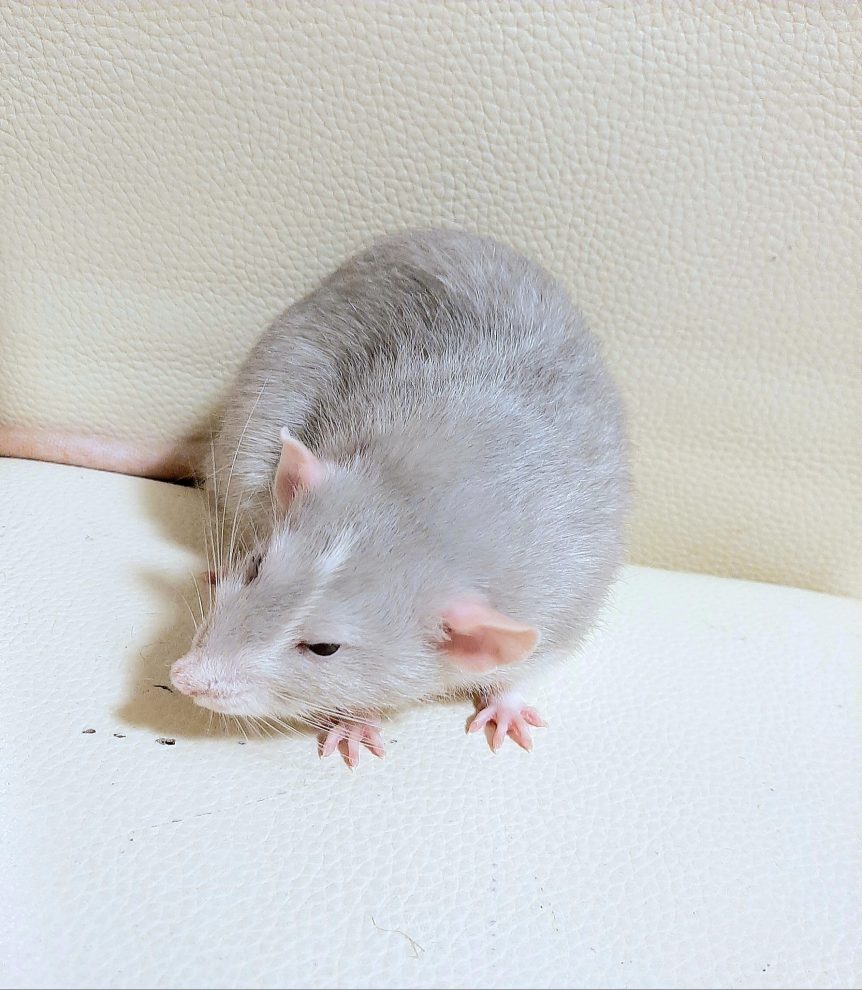 Behind the Color Platinum is different genotypes can hide. Your name gets this coat color of the precious metal platinum. Such as platinum to the skin of rats platnfarbenen a cold light gray tone have no hints of cream, Brown or strong blue tones.

Die American Fancy Rat and Mouse Association (AFRMA) describes the color as follows: A light gray with no blue color cast similar to platinum Malfarbe. The eye color is black or dark ruby (Dark Ruby). The color was on 24.07.1999 included in the standard of AFRMA. Black as possible eye color was only at 26.04.2006 recorded.

In addition to the Platinum are available at the AFRMA also the Pink Eyed Rat Platinum Color. Their color is an off-white (off-white) be with a gray tint. The color should not be too bright (medium shade) and not with silver, Beige or champagne to be confused. The eye color is red (=pink).

The British National Fancy Rat Society (NFRS) Platinum describes as a smooth and shining pale gray with a distinct ice-blue tone, without any hint of cream, Brown or more blue tones. The belly color is to be fit, feet Pale Gray. The eye color must be considered when NFRS ruby (Ruby) his.

The German standard of color rat1)Noack, J. & Flechsig, Dr. S. (2012), The German standard of color rat deviates so far away from the description of the AFRMA and NFRS, that significant blue inclusions are to be present. The paint itself should be an intense dove gray. The color should be uniform on the back and abdomen, The undercoat is slightly lighter than the top coat. Again, the eyes must be dark rubin.

The genetics of platinum rat

Regarding the genetics, the color Plantinum underlies, there are different specifications, some of which contradicts the information required by the standards genotypes.

The AFRMA to two gene variants on: Blue (is meant English / American Blue) + Mink for the variant with ruby ​​eyes and Blue + Chocolate for the black-eyed animals.

Contradictory here, that ruby ​​eyes only by the homozygous presence of the red-eye dilution allele (R.E.D., r abbreviated) arise. Blue (abbreviated d) and Mink (abbreviated m) only lead to black-eyed animals. One can now think about, whether the heterozygous presence of R.E.D., which can lead Mink animals to slightly reddish appearing eyes ("Havanna"), can also be interpreted as ruby. But the genotype aa dd mm RR does not lead to animals with ruby ​​eyes.

The NFRS refrained from indicating a genetic code.

In the German standard of color rat following genotypes are given: English Blue + R.E.D. (aa dd rr), English Blue + Mink or Mock Mink (here the same contradiction as when AFRMA)