Agouti is basically the color, with which began the history of color rat, because it corresponds to the original color of the wild brown rat, which is the ancestor of our domesticated rats. Already 1902 the first agoutifarbenen rats of Douglass and Vale were at an exhibition in Cheltenham, England shown. At that time there was already an official standard for the color Agouti.

The first reaction to a agoutifarbene rat is usually "Oh, the looks like a wild rat." Here is true only in part. Our Agouti rats were selected over the years thereafter, to have a reddish brown fur as possible, appear more grayish while wild Norway rats (AFRMA).

Robinson (1965) 1)Robinson, R. (1965) Genetics of the Norway Rat. Pergamon Press, Oxford already describes two dwarf mutations. The first has been described 1934 by Sciuchetti and Lambert2)Rossin, A. M. and LAMBERT, W. V. (1934) A study of the inheritance and physiological behavior of dwarfism associated with an eye defect in rats. Proc. Iowa Acad. Be., 41: 317-18 writable in his book "Genetics often he Norway Rat" agouti as follows:

The back is gray, wherein the amount of yellow and black hair, distributed in the coat, vary. The black hair is focused somewhat on the back line. The yellowish color, which is triggered by a subapikales belt by the hair, is to the bottom of the animals towards paler. The color on the underside is brighter than that of the top. There are fewer black pigmentation. The peritoneum is pale cream with a tendency to blue-gray, the hair is actually white with a bluish base of the hair are.

Dry (19283)DRY, F. W. (1928) The agouti coloration of the mouse (Mouse muscle) and the rat (Mus norvegicus)). J. Genet., 20: 131-44. dealt in detail with the banding of the hair. The yellow ribbon, that the distribution of melanin in the hair fiber breaks, not found in all hair. Die Deckhaare (Monotrichs, Awls]) never appear banded, while the next stronger hair, the Auchene-hairs are mostly banded for about 50% the undercoat fibers (zigzags) banded are. The standard for Agouti

Characteristic of Agouti and all color combinations with Agouti is a distinct banding of the hair. Instead of being uniformly colored from the base to the tip, the hair is divided into different areas. This harness or in English "Ticking" plays a role in many animal species. Among others, our tabby cats agoutis. The sequences of harnesses vary depending on the species and type of agouti. In agoutifarbenen rats, the base is usually dark gray to black, followed by a red-brown band and a black hair tips.

The National Fancy Rat Society describes in her standard agoutis as strong reddish brown in color with a uniform banding and black guard hairs. The undercoat should be dark gray to black, the abdominal silver gray. The color of the feet should correspond to the top and the eye color is black (NFRS). The AmericanFancy Rat and Mouse Association describes agoutis as follows: The color should be a strong maroon with dark shale at the base of the hair. The coat should be uniform banded with black hair tips. The abdomen should be silver gray and black eyes. The genetics of agouti rat

Agouti is on a locus, wherein the agouti A allele is dominant compared to the non-agouti allele a. While A causes the characteristic banding, is the hair of homozygous aa -Tieren monochrome from the shaft to the tip. So Agoutifarbene rats have the phenotype Aa or AA, or. A-, it is not known, whether homozygous or heterozygous for Agouti is.

Come in addition, that agouti rat may show more color. A rat, die z.B. homozygous for the Russian -Blue allele and at least one agouti allele, would not be a pure agouti, but a Russian Blue Agouti. Similarly, there are for all other colors corresponding agouti variant. On the side of the American Fancy Rat and Mice Association you will find some interesting notes on breeding of rats agoutifarbenen.

It should make no difference, whether the Agouti allele pure- or heterozygous is present.

Regarding the Chocolate locus are preferred animals, the homozygous for Non-Chocolate BB are, as heterozygous Bb animals should seem a bit dull in color.

Regarding the impact of R.E.D. and P.E.D. there is no clear statements.

All other recessive characteristics such as e.g.. Russian Blue, Mink etc. should also be avoided.

The statements of the National Fancy Rat Society partially disagree, after which rats, heterozygous for Chocolate, Mink or P.E.D. should have some better colors, may appear bland while heterozygous R.E.D. carrier and the coat of English-Blue-makers looks dull. digressions: Genetics, development and evolution of adaptive pigmentation in vertebrates 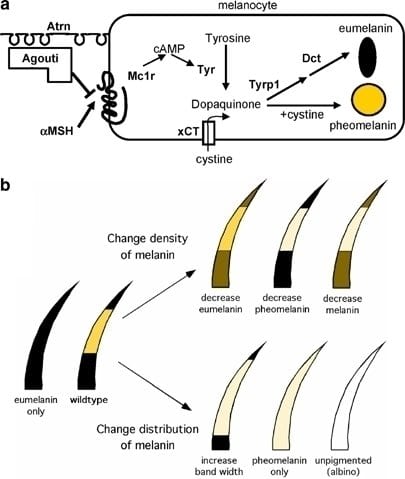 Genetic pathway regulating mammalian melanogenesis and phenotypic effects on individual hair pigment and pattern. (a) Circulating -MSH (a derivative of POMC) activates Mc1r, a G-protein-coupled transmembrane receptor, and signals via cAMP. Intracellularly, tyrosine is oxidized to dopaquinone, a reaction catalyzed by the enzyme tyrosinase (Tyr). Cyclic AMP is thought to affect the enzymatic activity of tyrosinase as well as eumelanic-specific enzymes, tyrosinase-related protein 1 (Tyrp1) and dopachrome tautomerase (Dct). When all three of these enzymes function properly, eumelanin (brown to black pigment) is deposited in melanosomes. Agouti, the inverse agonist of Mc1r, binds to Mc1r with the aid of the extracellular protein Atrn to repress intracellular cAMP levels, resulting in the 'switch' to the production of pheomelanin (yellow to red pigment). The production of pheomelanin is dependent on the incorporation of cystine, whose uptake is at least partially regulated by xCT (the Slc7a11 locus). (b) Overall coat color in mammals is determined by the density of melanin and the distribution of melanin (or melanin types) on individual hairs. Pigment on individual hairs ranges from fully pigmented with dark eumelanin to complete absence of pigment resulting in albino hairs. Typical wild-type hairs in mammals have a subterminal band of light-colored pheomelanin flanked by darker eumelanin, providing an overall brushed appearance.